The Philadelphia Eagles and their fans have been waiting for this day way too long. Most questions will be answered later tonight as to who has the better defense, and just maybe who rightfully  has the best team. What will not be questioned is how relentless, loud and intense the Philadelphia fan base can be. No matter what local media outlet you choose, you can see and almost feel the enthusiasm and intensity around the tri-state area. From the schools with young kids to the homes of senior citizens, the Eagles fight song has been repeatedly heard loud and clear. The Eagles kickoff party started 6 a.m. Friday morning at South Philly Chickie’s and Pete’s. Then XFINITY Live took the party from 5pm to almost 2 a.m. into the night. After the night party fell close to 2 a.m., the Eagles Twitter and Facebook groups took over and it’s been ongoing ever since. Last night so many Eagle fans were very active   within their Eagle Facebook fan groups.   From about 2 a.m. to at least 5:30 a.m. they all were posting one the main theme:  “I can’t sleep, I can’t wait, come on Eagles let’s do this. I only know this because I too was up watching all the eagle chatter since 2 a.m. even though I had to be at work at 6 a.m. The old adage saying of “let sleeping dogs lie” won’t apply to the Philadelphia Eagles and their fan-base   this week. Thank-you football world waking up the dogs, “Underdogs” that is!

While many Eagle fans have already heard how they won’t really affect the game, the Eagles football team has been dealing with their disrespectful media gestures too. Even though the Eagles kept finding ways to win while losing key starters along the way the loss of respect was louder than ever. After each game after the loss of QB Carson Wentz provided the Eagles not the opportunity to win but rather the opportunity to be underdogs, according to so called football people. The Eagles are the number one ranked defensive team in allowing the least amount of points in their home stadium. Even though many say that defense wins championships, apparently, it’s still not enough as they’ve been titled the “Underdog” in both playoff games. Thank you, Vegas and others, for wanting the Eagles to be the NFL “Underdog Hero” rather than Cinderella. 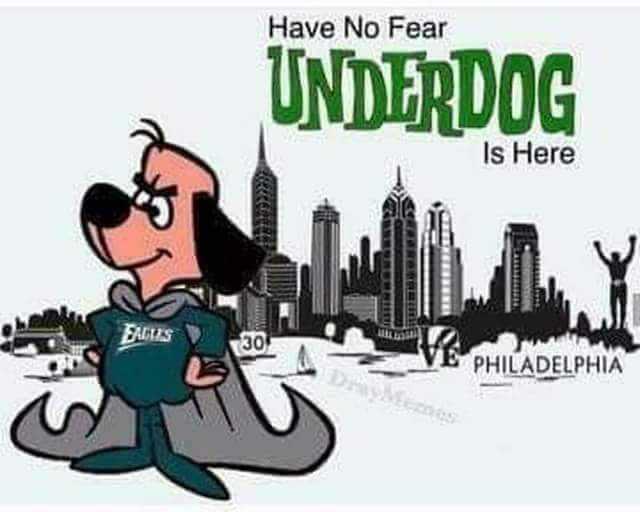 As we all watch our Eagles play today, I have a couple things for everyone to remember.  much like I was telling everyone last week Nick Foles doesn’t have to play a perfect game. Everybody wants to remember Nick Foles for having the perfect game in that one special year that he had with the Eagles. As long as he keeps his QB rating between 90 and 100, the Eagles will be just fine. Nick Foles has a not-so-good game like the one against the Raiders he normally plays well the next 3 games the Eagles have the better run game and offensive line if you’re of the mindset the defense wins championships then we could be in for a good time these are the top two ranked defenses but remember once again that are Eagles defense give up the least amount of points at home (13 pts.). Assuming that all three phases of Eagles football (offense, defense, special teams) actions are accountable on the field, our Eagles will be in a great position. As long as the Eagles keep away from turnovers and penalties, the Eagles will win this game.

The Eagles would definitely appreciate all the noise. I’m not sure if the Vikings will appreciate all the noise, but I’m sure our Eagle players will. The Lincoln Financial Field should be rocking at a feverish pitch from start to end somehow I think the home field fans will find a way to raise the noise roof to another level we all knew how long was tonight game and crowd is going to be epic but wait until we take it all in doors at the Dome

One Reply to “Underdog Eagles FlyEaglesFly”